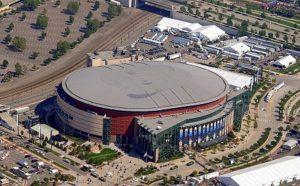 If you are traveling south on I-25, take exit 212B toward downtown. Turn left onto Speer Boulevard. At the second stop light, turn right onto Chopper Circle.

Camry Lot (VIP)
Camry (VIP) Lots are located on the southwest side of Pepsi Center. During Colorado Avalanche home games, access is restricted and available only to vehicles displaying a VIP parking pass.

Valet Parking (Land Cruiser Lot)
Valet Parking is available to the general public and offers the most convenient way to arrive and leave Pepsi Center. Valet drop-off and pick-up is located on the circle drive outside of the East Atrium.

Parking for Guests with Special Needs
Pepsi Center has more than 99 parking spaces for guests with special needs. The designated spaces are located in Lots Camry, RAV4 and Tundra. 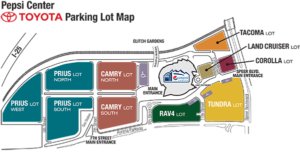 Welcome to The Pepsi Center – See the parking lot map

Hotels Near The Pepsi Center

Designated Pick-Up and Drop-Off Zones:  Lyft has the fix with our pick-up/drop-off location on Chopper Circle. Just look out for the Lyft flags and signage, right outside of Breckenridge Brewery and in between the Grand Atrium and East Entrances.